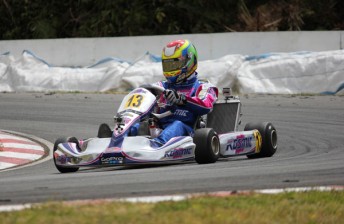 Matthew Waters on his way to victory in the 2012 CIK Trophy of New Zealand. Pic: Fast Company/Andre Elliot

Competing in the CIK-specification KF2 category, Waters crossed the line ahead of local driver James Gorham to bring the prestigious trophy ‘Down Under’.

“It’s a great feeling to have won in my first attempt at an event outside of Australia,” said Waters, who was one of four Australians competing in the event.

“The win gives me some good confidence entering the upcoming year where I’ll be competing in a lot of the State Championships, along with the National Championships, and chasing the Pro Light (KF1) title in the CIK Stars of Karting Series.

“When I look at the perpetual trophy it has the likes of the great Australian driver Matthew Wall (2005) and 2003 World Karting Champion, New Zealander Wade Cunningham etched on there, it’s an honour to be recognised alongside of these guys.”

Waters’ fellow Sydney driver Jake Parsons was unlucky not to have joined Waters on the podium. The 17-year old started from position three for the 31-lap final but unfortunately he was caught up in a turn one incident with Arie Hutton that eliminated the pair.

Brock Plumb flew the Australian flag high in the International KF3 category but was unable to make it a double victory for Australia with Josh Drysdale proving superior. Drysdale dominated the weekend while Plumb continually adapted to the local conditions before crossing the line second in the main event.

Jason Faint showed some good speed across the weekend but was plagued by a number of mechanical gremlins. Faint started the final from ninth position and had made his way up to sixth within a matter of laps to be closing in on the top five. Unfortunately, a gearbox issue dropped him to tenth in the classifications.

All four drivers will return to Australia today before embarking on their campaigns in the 2012 CIK Stars of Karting Series that kicks off in Adelaide on February 25/26.