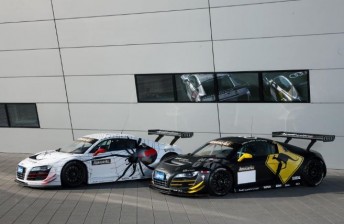 Audi’s factory assault on the 2012 Armor All Bathurst 12 Hour is set to take on a uniquely Australian look.

In an extension of last year’s effort, the 2012 race will see the Phoenix Racing prepared R8 LMS entries pay homage to two native Australian creatures – the kangaroo and the red back spider.

In a cheeky reference to sightings of kangaroos during past Bathurst endurance races, the car to be shared by Christopher Mies, Darryl O’Young and Christer Jöns will carry a kangaroo warning graphic complete with text reading ‘Next 6km’.

The spider liveried car will be driven by Australian drivers Craig Lowndes, Warren Luff and Mark Eddy as Audi attempts to defend its one-two domination of the 2011 race.