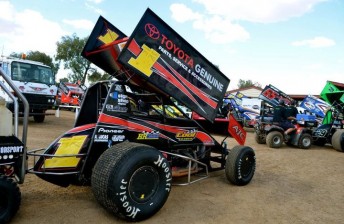 Brooke Tatnell has taken a dramatic win  in successfully defending his Australian Sprintcar Title and emulating the feat of his father – George – who won the Australian Championship at Speedway City in 1988.

Tatnell’s win wasn’t the easiest of the five he now has in the history books. Favourite and pole-sitter, Steven Lines exited mid-race  with a blown right rear on the slick track conditions. Assuming the lead was Tasmanian 18-year-old, Shaun Dobson.

The fairytale for Dobson was not to be, as Tatnell executed an outstanding pass on the emerging star to take the decisive lead. He did however record a phenomenal result finishing second and really cemented his place on the national scene as an emerging star.

The changing of the guard theme continued with fourth placed Victorian, Jamie Veal – who put in a brilliant drive just to miss out on the podium. He was followed by Robbie Farr, another youngster in Jamie Bricknell, local Matt Egel, former champ James McFadden, Trevor Green and Victorian, Grant Anderson.

“It doesn’t matter who you’re driving for but when you’re driving for the best guys in the country, it’s a great feeling,” Tatnell said immediately after exiting the Toyota Genuine Parts machine. “I know what it feels like to finish second and finish third in the Australian Title, so I feel for these young blokes, but I drive for the best guys anywhere in the world  and you couldn’t have scripted it any better – this one is going to be remembered for a long, long time in my book.”

From the four times that the Australian Title has been conducted at Speedway City (nee Speedway Park), two families – the Tatnells and the Braziers – have walked away with the A1 crown.

“We’ve had a tough year, but we knew things were going to change eventually, our guys are on top of their game and I think that Brooke is still the best in the country,” Krikke said. “Those guys gave him one hell of a hot rod and Brooke drove one hell of a race and it’s great to see one of these younger guys right up there.”