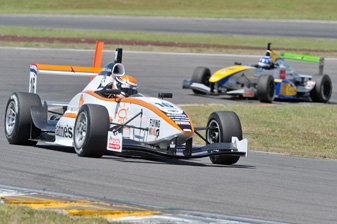 A fifth in the first race, a win in the second and eighth in the feature race were enough to keep Cassidy well in control of the championship, taking 546 points to the next round at Hampton Downs with Damon Leitch second on 517 and Josh Hill moving up to third on 424 points.

In today’s first race, Cassidy and Leitch re-asserted their dominance with a one-two result that extended their championship points lead.

Ferrari Driver Academy racer Raffaele Marciello held the lead briefly during the opening laps but was reeled in by Leitch and Cassidy, who was was fourth after a bad start but recovered in a stirring drive to win.

In the feature race – the Denny Hulme Memorial Cup – van Asseldonk and Hill had the front row, and right from the start, the pair were locked in a wheel to wheel battle. Van Asseldonk emerged with the lead, harried by Hill for the next five laps. The Dutch driver slowly opened out a lead of half a second, then a whole second, then two.

Hill’s car was proving tail-happy under heavy braking and he lost losing touch with van Asseldonk. The Dutch racer controlled the gap over the last two laps, taking an unpressured win to be fourth for the series.

The 2012 Toyota Racing Series now heads to Hampton Downs for the fourth round of five. The feature race of the coming weekend is for the historic NZ Motor Cup.