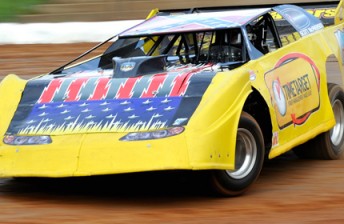 Francis – driving for local car owners, Bruce Mackenzie and Scott McPherson in the TimeTarget supported machine, led every single lap of the feature race to claim his maiden Australian Championship. It was also the first time the Championship – traditionally WA-based had been conducted in Sydney.

Fourth placing went to American teenager, Devin Moran – who fried his tyres on the slick racing surface. Speedcar regular, Nathan Smee rounded out the top five in his maiden Late Model race. Defending and multiple Champion, Bunbury’s Brad Blake failed to have the pace in the #0 machine, finishing an unusually low eighth placing.

Francis and Moran ended the opening night of competition on top of the points – having dominated the heats and preliminary features.

“It’s fantastic to come back to Australia and have the opportunity to try and win this Championship,” said Francis. “The guys from TimeTarget gave me a great car to work with. We came here to win the Championship and that’s exactly what we were able to do.”

Late Model sedans run in Australia mirror the rules of those used for the World of Outlaws Late Model Sedan Championship.