Moffat to unveil car by live rebuild in Sydney

Moffat to unveil car by live rebuild in Sydney 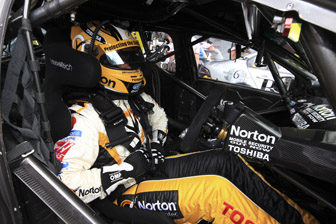 James Moffat will reveal the look of his 2012 Ford Falcon in Sydney on February 6.

The Dick Johnson Racing, finished 23rd in last year’s V8 Supercars Championship, has elected to unveil his new car in a unique way, with the DJR team assembling his Falcon FG in front of a live crowd.

Fans at the launch will have the opportunity to assist in the rebuild of the #18 Falcon, plus can win 2012 merchandise, money-can’t-buy experiences with the team and a hot lap with Moffat.

Moffat will be part of an expanded four-car DJR team in 2012. Moffat will hand his former Jim Beam colours over to Dean Fiore, who’ll drive the second Jim Beam Falcon alongside Steve Johnson. Moffat will drive a Norton 360-backed car, while STeve Owen joins the squad in a fourth Falcon entry.

The rebuild/unveil will take place at Town Hall, Church Street, Parramatta at 12pm-1pm on February 6.