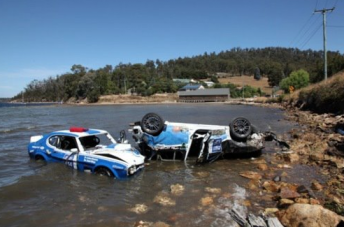 Miedecke, who is poised to drive with Sonic Motor Racing in this year’s Development V8 Supercars Series, was competing in the Classic Outright class in his Ford Capri Perana before ending his rally in the Huon River.

Miedecke, the son of touring car stalwart Andrew, was joined in the drink by Ralph Norton’s Subaru after they both missed a corner on the day’s fourth stage (Esperence Coast).

Both drivers emerged with no significant injuries.

Another casualty on the first day was early 4WD Showroom class leader Ric Shaw in his Mitsubishi Lancer Evo X.

Conditions in Hobart were considered perfect for tarmac rallying.

While some struggled, Victorian driver Matt Close currently leads Targa Wrest Point after finishing Day 1 at the head of the leaderboard.

Driving his Audi TT RS, Close and his co-driving wife Casey had a largely troublefree day to finish eight seconds clear of pre-race favourite Jason White in his Lamborghini Gallardo.

Young gun Brendan Reeves, driving his Mazda RX8 SP, is in third place, a further 17 seconds further back in the modern competition.