Tyler Walker to race in WA

Tyler Walker to race in WA 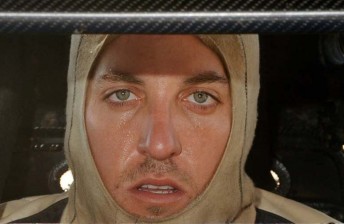 Former NASCAR truck racer, Tyler Walker is set to return to Australia in the coming weeks to complete a Sprintcar campaign in Western Australia.

The American has been contracted by WA car owner, Garry Miller to come and pilot his Sprintcar in the West Australian World Series Sprintcars legs and also at the annual Krikke Boys Memorial at Bunbury.

The last time that Walker raced in Australia last season with Titan Racing, however was sacked midway through his tenure by Titan Racing boss, Reeve Kruck. He left Australia in controversial circumstances.

The 32-year-old, who became famous for his victory celebration backflips, has always been considered the brash wunderkind of Sprintcar racing since his emergence in the mid-1990s, his career highlights including a Championship win in the now defunct World of Outlaws Gumout Series (Development Series) and rookie of the year Title in 1996 at the Knoxville Nationals.

His NASCAR career was cut short following a positive drugs test in 2007. Since then, he has been working on re-building his career in Sprintcar racing. One thing that Walker is consistently – is spectacular and in his previous visits to Australia has always proven to be popular with racefans.

Aside from the World Series campaign, which will begin on February 1 at Kalgoorlie, Walker will be assisting Miller’s son, Jake, who is just embarking on his own Sprintcar career.

In other World Series related news, Tasmanian, Shaun Dobson will complete the season in his family-owned car out of Tasmania. The 18-year-old was, ironically, contracted to Titan Racing, however was let go mid way through the season. The family have brought the car to the mainland for the Australian Sprintcar Title this weekend in Adelaide and will continue the trek west.