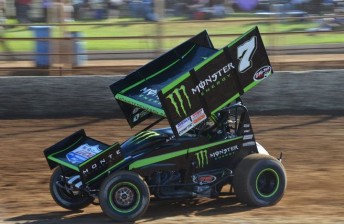 Mount Gambier’s Steven Lines has swept all before him to take the opening night preliminary feature of the 50th Australian Sprintcar Title at Adelaide’s Speedway City.

Lines – who is yet to have won an Australian Sprintcar Title (he is a former Street Stock national champion) – heads into the second night of competition leading the pointscores also.

The big guns in the Title chase have had a quiet start to their campaigns, however with another full night of racing tomorrow and difficult track conditions being served up due to the heat in Adelaide today, there is every chance they will be right up the front once the A-Main rolls around tomorrow night.

Robbie Farr in the Orrcon Steel Eastcoast Pipelines machine finished the preliminary in sixth, whilst Brooke Tatnell crossed the line in eighth. Current World Series Sprintcars leader, James McFadden was 11th with Garry Brazier ending the race in 16th. Brazier was involved in an early race incident with Ricky Maiolo that ended the South Aussie’s race.

Those not to have made the feature tonight and therefore with plenty of work to do tomorrow included multiple champion, Max Dumesny, local hope Trevor Green, Sydney brothers Ian and Kerry Madsen and Grand Annual Sprintcar Classic winner, Ian Loudoun.

Hostilities will resume tomorrow, with additional heats leading towards the last chance B-Main and the Grand Finale over 50 laps.