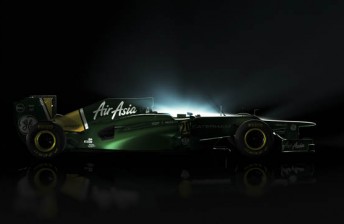 The side of the new Caterham

The newly-named Caterham team (formally Team Lotus), is the first 2012-specification F1 car to be unveiled to the public.

The team will continue into its second year of a technical supply agreement with Red Bull (gearbox/hydralics) and Renault (engine/KERS) for their power train.

The images show the car wearing 2011 wings, vanes and brake ducts, although the car is clearly a step forward.

The three features which stand out as different from its predecessor are the nose, the sidepods and the roll hoop.

The drivers for the team’s 2012 campaign have not been confirmed. Heikki Kovalienen is set to retain his seat, while the future of Jarno Trulli is less secure. Former Renault driver Vitaly Petrov has been linked to the drive. An images of the car from the rear

Now in its third year as an F1 team, Caterham is yet score a world championship point, but team owner Tony Fernandes is hopeful of turning that statistic around.

“Target wise, I want us to score a point this year and that really has to be the aim,” Fernandes said at the launch.

“Towards the end of last year we were so close to the midfield cars, but our lack of KERS limited our capabilities.

“This year, however, with the people and facilities we have in the factory and the wind tunnel, and with KERS, I am confident that we will become a danger to many of the midfield teams, and yes, I want us to achieve a point somewhere in 2012 – maybe two if we are very lucky!”

The opening round of the world championship will be held at Albert Park for the Australian Grand Prix on March 15-18.