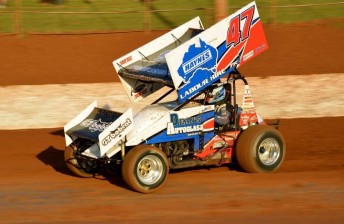 American, Jason Johnson reigned supreme at Adelaide’s Speedway City in the curtain raiser to the Fuchs Lubricants 50th Australian Sprintcar Title due to be held in the City of Churches this weekend, defeating West Aussie Ryan Farrell and Brooke Tatnell.

Johnson – a Speedway City specialist – started on the front row alongside surprise pole-sitter, Brent Aprile. Despite winning the prelude meeting – Johnson – as with the other Americans that raced are ineligible to compete in the Australian Championship.

Farrell – who is yet to win an Australian Title – got a psychological edge over his rivals by being the first Australian across the line and will be one of the contenders come Saturday night, whilst Tatnell is showing that ominous form that has seen him win four of the last seven Australian Championships. His first Title came in South Australia at Murray Bridge in 2005.

The Australian Title starts on Friday night with the opening rounds of heats, with the conclusion coming on Saturday at Speedway City.