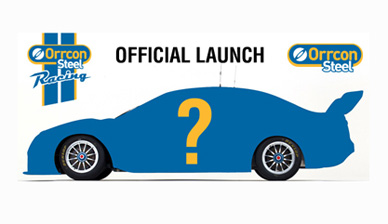 V8 Supercars fans are being invited to one of few public V8 car launches.

The #5 Orrcon Steel Ford Performance Racing Falcon will be unveiled at the Ice House in Melbourne this Monday, where those attending will be the first to see Winterbottom’s 2012 look.

The covers will come off the factory Ford on Monday, January 30 at 7.30pm. The event is free for the public.

Winterbottom will be at the unveil, sporting his ‘moon boot’ after breaking his leg in an off-season skiing accident.

The Orrcon Steel-back car will have the wraps taken off it on the ice skating centre’s ice floor – and will be the first V8 Supercar ever to be driven on ice (not including some of those Bathurst races where it has hailed!)

Speedcafe.com subscribers can win the chance to be at the launch of Frosty’s Falcon.

Not only will you and your guest be the first to see the brand-new 2012 livery, you’ll also get to hangout with Winterbottom and his good buddy, Olympic Gold Medalist Steve Bradbury.

The winners will receive an invite to the launch after party and an exclusive, special announcement from the team.

The winners will also score a Castrol EDGE hoodie.

Entering is simple. Sign-up to the Speedcafe.com newsletter for your daily racing fix and you automatically go in the draw to win one of two double passes to the exciting launch of Frosty’s 2012 V8 Supercar.

And if you are a current subscriber – you’re already entered!`