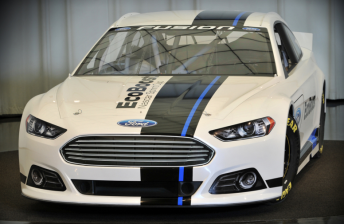 The 2013 Ford Fusion Sprint Cup car has been unveiled, featuring a new look that Ford hopes will bring the company’s own identity back to the sport.

Featuring a completely redesigned new silhouette and fresh face, the 2013 Fusion Sprint Cup car was designed to be the face of a new era of stock car racing.

In a bid to give each make its own ‘brand,’ rather than the current ‘control’ body shape, Ford has addressed the overall proportion of the race car to reflect proportions found in the production Fusion. It has also drawn on brand and design cues in the side of the vehicle, plus an identifiable front grill.

The first look of the Blue Oval’s NASCAR entry was simultaneously launched alongside its production model.

“We wanted Fusion to be the car that helped return ‘stock car’ to NASCAR,” said director of Ford Racing Jamie Allison.

“I think fans, when they see the car, are just going to smile and cheer. It is going to reengage them with the sport and make the sport better because there is just something natural about seeing race cars that look like cars in their driveways.”

Ford has taken a different approach with the development of the 2013 Fusion racer. Ford Design Centre staff, led by Garen Nicoghosian, and Ford aerodynamicist Bernie Marcus, spent the past year doing the early design development, freeing up the Ford race teams to concentrate on weekly NASCAR competition.

“This is a seminal moment in the sport where we had a chance to get it right once again and make sure the race cars are race versions of street cars,” Allison said.

“And I am proud because I believe we have accomplished just that.

“The 2013 Fusion is a stunning car and the 2013 NASCAR Fusion is even more stunning and I can’t wait to see it perform on the track and connect with race fans.”

The new Sprint Cup Fusion entries will be tested throughout the 2012 season in preparation for its racing debut at the 2013 Daytona 500 in February.