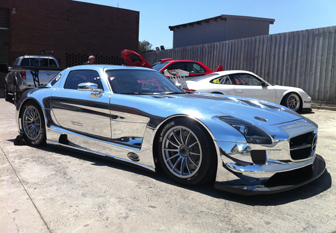 The new ‘gullwing’ SLS, to be run by Erebus Racing, is the same specification as the car that Hackett drove in last year’s GT Championship.

Hackett will take the reigns of the new car, while James Brock will drive the car Hackett raced last season.

Brock had his first drive of his SLS at Phillip Island recently, using the day to adapt to the car’s unique characteristics.

CLICK HERE for more with Brock in this week’s edition of Cafe Chat.

The new Mercedes SLS is the same specification as Brock’s car, with the only real difference is that there is a specific passenger safety cell – making passengers going on a hot lap in the car as safe as the driver!

The two Mercedes will not race in next month’s Armor All Bathurst 12 Hour, although the Erebus team will play its part in European team Black Falcon, who is bring its own two SLS machines.

Hackett’s new SLS will make its Australian track debut at Winton next month.