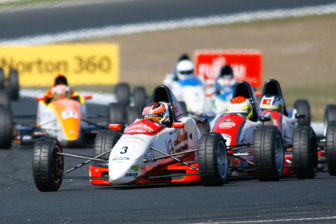 The Australian Formula Ford Championship will return to Bathurst this year

The Australian Formula Ford Championship will return to Mount Panorama as a support category to the Supercheap Auto Bathurst 1000 this year.

The confirmation of the classes return to Bathurst comes after Formula Ford announced its 2012 calendar today.

Bathurst will be the final event on the calendar.

National-level Formula Ford racing has been absent from the famous Bathurst circuit since 2004 (a non-championship round), making this year the first time that the Ford Fiesta engine will race there.

In the recent past, state-based Formula Ford has competed there at the Bathurst Motor Festival.

The last national Formula Ford race held at the track was won by Andrew Thompson.

In that 1996 Formula Ford championship event, David Besnard won the round.

Category administrator Margaret Hardy said that this year’s calendar is one of the best Formula Ford calendars in years.

“We’ve been working really hard with V8 Supercars to lock in a calendar for this season and I think we’ve ended up with one of our best calendars to date,” Hardy said.

“There’s a great variety of circuits, which will test the drivers, and the season is bookended by two major events, which is great.

“We’re excited about being back on the Australian Grand Prix schedule as it’s a great way to start the year and all the drivers love the opportunity to race in front of the Formula One community. The fact that we can also include Hidden Valley on the calendar is a huge plus for everyone involved. The circuit produces great Formula Ford racing and the atmosphere at the event is second to none.

“The Bathurst 1000 is the best finale we could have asked for and we’re very proud to be able to announce it as part of the calendar this year. The last time we visited Bathurst in 2004 it was a non-championship event, so it hasn’t been part of the Australian Formula Ford Championship since 1995. In the past, the circuit always created great racing and this year will be no different; I think we’re in for a really exciting season.”

Besides Bathurst, Formula Ford will host all of its rounds on V8 Supercars supports bills, moving away from the Shannons Nationals (which it held two rounds with last year).

See below for the 2012 Australian Formula Ford Championship calendar