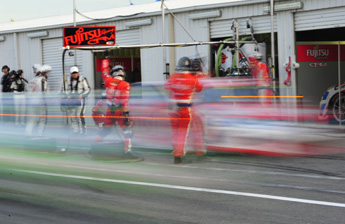 Garry Rogers Motorsport will unveil its new look on February 10

Garry Rogers has confirmed that he will unveil his new-look Fujitsu Racing Commodore, and possibly the identity of his new driver, on the evening before the season-opening test at Sandown Raceway.

Rogers will host his livery launch on the evening of February 10 in an invite-only event at the team’s Dandenong South, Victoria, workshop.

The identity of Rogers’ entry, who will partner Michael Caruso this year, has been one of the mysteries of the summer. The wily team owner has been searching for a replacement to drive the #33 Fujitsu Racing Commodore after it was revealed mid-year that long-time team driver Lee Holdsworth would drive for Stone Brothers Racing.

With just 18 days until his team’s planned livery launch, Rogers says he still has not made up his mind on who will drive the Fujitsu Commodore.

“No concrete idea at the moment,” Rogers told Speedcafe.com today.

“We’re working away at it.”

Last year, drivers of the calibre of Alex Davison, Daniel Gaunt, David Russell and enduro driver Marcus Marshall had been tipped as contenders to partner Caruso. In a season-ending test at Winton, Rogers tested four young stars – Scott McLaughlin, Tim Macrow, Cameron Waters and Paul Laskazeski. All four drivers got some seat time in a low-key driver audition. Of those four, McLaughlin has stood out as the favourite, given his experience in the Development V8 Series at SBR, plus his ties with Fujitsu General.

GRM’s February 10 launch will be followed by the season-opening test day at Sandown the next day.

The test day is compulsory for 28 V8 Supercars. Admission to the event is free to the general public.