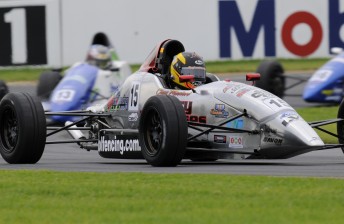 The Australian Formula Ford championship has confirmed that its 2012 season will begin at the Australian Grand Prix at Albert Park (March 15-18).

As predicted by Speedcafe,com, The announcement marks a return to the AGP schedule for the category after starting the 2011 season at the Clipsal 500 in Adelaide.

The Formula Ford class, regarded as Australia’s premier junior open wheel category, has not yet confirmed its entire calendar, but category administrator margaret Hardy says that having the Grand Prix as its season launch is great news.

“The Australian Formula Ford Championship has been working hard to lock in a calendar for the 2012 season and we’re very pleased to be able to announce that the season will begin at the Australian Grand Prix in March,” Hardy said.

“Being on the program at the Australian Grand Prix is a huge thing for the championship  and we’re delighted to be back to showcase the future stars of Australian motorsport in the country’s premier junior development category.

“I know all the drivers look forward to the event and being able to race in front of the Formula One paddock is a huge opportunity, so I have to thank the Australian Grand Prix for working with us to ensure we are at the event.

“We are incredibly close to finalising the remainder of the 2012 calendar, with just a few events waiting to be confirmed and will announce the full schedule in the coming weeks.”

While the Australian Formula Ford Championship has confirmed its spot, it was also confirmed over the weekend that the Grand Prix’s Celebrity Challenge has been axed.