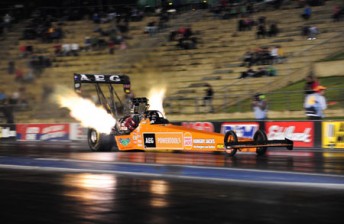 Top Fuel Champion, Darren Morgan is excited by the return to Adelaide this coming April

Championship drag racing will return to Adelaide in April when an ANDRA Pro Series round visits Adelaide International Raceway across the weekend of April 13-15.

It has been 10 years since the City of Churches has hosted a points paying, ANDRA sanctioned event and it will feature Top Fuel – along with Top Alcohol, Top Bike and Pro Stock Motorcycle.

The crowd favourite Top Doorslammer and highly competitive Pro Stock categories will be the only professional categories not racing in Adelaide. An ANDRA spokesman cited the proximity to the March round for those categories in Sydney as one of the key reasons for their non-inclusion – and stated it is on the agenda to include them for the 2013 event moving forward.

The recent change by ANDRA to allow different racing distances for the Championship has allowed Adelaide International Raceway back onto the calendar. The Pro Series event in April will be conducted over the stated NHRA Championship distance of 1000 feet (or just over 300 metres).

“Being just four hours up the road from Adelaide, it is now our home race,” said Morgan. “We’re excited that we’re returning to Adelaide and that it is part of the National Series again.”

The market for professional drag racing in Adelaide was reinforced back in November when an exhibition event attracted over 10,000 spectators and event promoter, Rino D’Alfonso says the impact of drag racing returning to Adelaide will be huge.

“The event will attract competitors and spectators from around Australia, delivering an economic boost to South Australia,” said D’Alfonso.

“Top Fuel dragsters are the pinnacle of the sport and when you see them live, it’s like an earthquake hitting. People are excited about the return and cannot wait for the event.”

The Adelaide event is the beginning of what many hope will be a new era for the sport. Already there are rumours that the ANDRA Championship may visit Darwin in addition to Adelaide – as well as servicing the current strongholds of Sydney, Perth and Willowbank.

In other Pro Series news, five Top Fuel cars have nominated for this weekend’s Championship round at the Perth Motorplex. They include last round winner, home town hero Damien Harris, Andrew Cowin, Morgan (who today unveiled his new website at www.darrenmorgan.com.au), Phil Lamattina and another West Aussie hope in Ellenbrook’s Mark Sheehan.