Chad Reed back on top with Los Angeles win

Chad Reed back on top with Los Angeles win 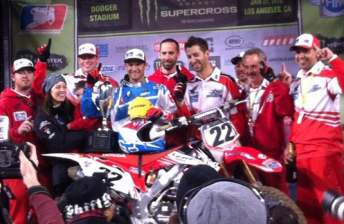 TwoTwo Motorsports/Bel-Ray Racing’s Chad Reed has taken his first victory of the 2012 Monster Energy AMA Supercross at Round 3 of the series at Los Angeles’ Dodgers Stadium.

The Australian, who crashed in his heat race and finished eighth, rebounded to take victory in the Main Event, three seconds ahead of title rival Ryan Dungey and James Stewart.

The 20-lap final was marred by a red flag on the opening lap, after a huge mid-air clash between fellow Honda rider Trey Canard and Ryan Morais.

Reed got away well on the race restart and was sitting third at the end of the opening lap. He moved into second on Lap 3 and took control of the race on Lap 5.

“It was awesome to bounce back after last weekends result,” Reed said, after finishing fifth in Phoenix last week.

“Week after week we are learning from our mistakes and we are doing all we can to makes sure the momentum keeps moving forward.

“That first lap was scary stuff, it all happened right in front of me. You never like to see your fellow riders go down like that.

“Throughout practice and my heat race I wasn’t really feeling it with the bike,” Reed explained.

“I just couldn’t get into a good rhythm so for the main we actually took it a step backwards and used the same compound Dunlops we used last year, which in conjunction with the chassis changes gave me a good feel.

“The bike felt much better after the start of the main so we made a couple of small changes before the restart which made it even better,” Reed added.

Round 4 of the Monster Energy AMA Supercross will be held at Oakland’s O.com Coliseum this weekend.