Loeb one stage away from Monte win

Loeb one stage away from Monte win 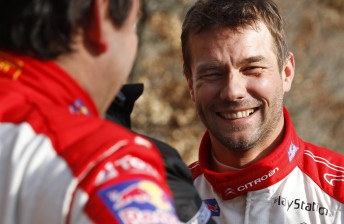 Citroen’s Sebastien Loeb is just one stage away from winning his sixth Rallye Monte-Carlo with the Frenchman extending his overnight lead to 2m41s during the opening round of the FIA World Rally Championship.

All that remains of Rallye Monte-Carlo is the 5.16km Ste Agnes – Col de la Madone Power Stage which puts additional championship points up for grabs for the top-3 times over the test.

Day 4 saw Castrol Ford World Rally Team driver Petter Solberg dominate the famous stages in the mountains above Monaco, winning three of the four tests to climb back to within 19 seconds of second place Dani Sordo of the MINI WRC Team.

“Petter was pushing really, really hard in the first two stages and took 25 or 26 seconds off me, which is a lot,” commented Sordo.

“Tomorrow there is just one stage of five kilometres so it will be difficult for Petter to overtake me. I will try to do my best in this stage, but I want to be on the podium and this is a really tricky and narrow stage.”

Citroen’s newly appointed Number 2 Mikko Hirvonen continued to display positive adaptation to the DS3 WRC with his third fastest stage time of the rally coming on the opening stage of the morning. The Finn holds a healthy buffer over fifth placed Evigeny Novikov who is set to match his best result which he once achieved back in 2009 on Rally Sardinia.

Tomorrow will take crews over one final stage before the rally winner is declared. The 5.16km Power Stage offers the fastest pacesetter over the test, three additional championship points with second receiving two and third, one. With the top-10 practically sealed there is still a lot to play for as the opening round of the WRC concludes tomorrow.

“With a lead of 2m41s and only 5.16 kilometres left to go, I think we can be fairly relaxed,” acknowledged eight-time World Champion Loeb.

“However, we’ll need to adopt a good pace. Every point counts in a World Championship and I fully intend to score some points tomorrow in the Power Stage.”