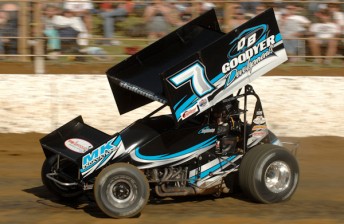 Craig Dollansky was the night one winner at Warrnambool (Pic: AF Images)

American World of Outlaws veteran, Craig Dollansky was the man to beat at the opening night of the Grand Annual Sprintcar Classic in Warrnambool, taking a stunning victory, sweeping to the lead past Ian Loudoun with 11 laps remaining.

Loudoun was the impressive early race leader in the 25 lap affair and traded the lead with his vastly more experienced competitor. Once Dollansky got clear air, however, he eased away from the field.

Kerry Madsen made a late race charge to finish second on the podium, getting past Loudoun in the final stages of the preliminary main – he will line up tonight as the high points man after the first night of competition.

Loudon crossed the line third just in front of a fast finishing Daryn Pittman and Brooke Tatnell finished the race in fifth.

Young American, Kyle Larson finished the A-Main just behind Tatnell, but what makes his story noteworthy is that he did it by qualifying through the B-Main and had to charge his way through the field.

Earlier in the evening, dual quick times were awarded to Garry Brazier (10.862) and Trevor Green (12.035) with Brazier quicker time gathering him the Alan Pollard Memorial and $1,000 for his efforts.

“It was a great effort by my team, my guys worked their tails off and you know, you’re right, this is probably the best car we’ve had here in Australia,” said Dollansky.

“When you have a race track like this it’s an awesome event and the whole team here do a great job.”

“We didn’t qualify real strong but the format for this weekend mixes things up and tonight it let us have two good heat races and two good results, it got us to where we need to be tonight.”

“This event is huge, the passion in the fans here is phenomenal and we love coming back. Tomorrow night 40 laps is a long way.”