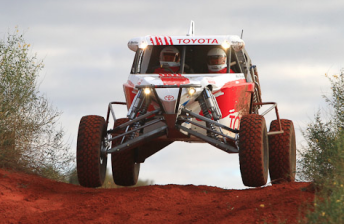 Major Australian off road competitors have been stunned by a decision to schedule an event of the Australian Off Road Championships on the same weekend as the Finke Desert Race.

The Finke, regarded as Australia’s most prestigious off road event, has been held on the Queens Birthday long weekend for more the past 30 years.

The Confederation of Australian Motor Sport (CAMS) and the Australian Off Road Racing Commission recently announced a new event in Sea Lake, northern Victoria, on the same weekend as the Finke.

Over the past few months, a war has sparked between CAMS/AORC and the Finke organisers over the commercial rights of the event.

With a resolution unable to be obtained, the new event will mean competitors will be forced to chose between one or the other.

Long-time Australian off road competitor Peter Kittle is livid with the decision to hold two meetings on the same weekend.

“The decision by AORCom to run Round 1 of the Championship to clash with the iconic Finke Desert Race has effectively ruled my team out of the 2012 Championship,” Kittle said.

“After racing almost every race in the AORC for the last 11 years, we have decided to race the Finke and not the Championship.

“This decision by organisers has forced us to choose and we will not abandon the Finke Desert Race which has lifted off road racing to a new level of exposure in Australia.

“We believe AORCom have made a bad decision and it will weaken the sport we all love. We also find it unbelievable that such a major decision has been made without any consultation with drivers and or teams.”

The Finke Desert Race will be held on June 9-11 in Alice Springs.

The 2012 Australian Off Road Championship Calendar has been confirmed, below: