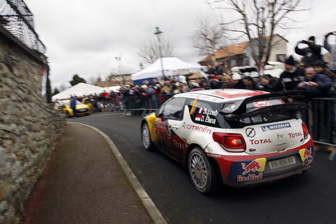 Sebastien Loeb continues to hold a convincing lead after Day 3 of Rallye Monte-Carlo, the opening round of the 2012 FIA World Rally Championship.

Day three took crews from Valence to the event’s home in Monaco some 400km south with three, testing stages to complete along the way where tyre choice became crucial as ice and snow blanketed sections of the competitive route.

Loeb took a risk free approach to the day to increase his gap on second place Dani Sordo of the MINI WRC Team to 2m9s by the end of play.

“I have a good gap on Dani [Sordo] so I did not take any big risks in there today because it was tricky and I had no reason to push hard,” commented the eight-time world champion.

However his choice of slicks on the front and only winter tyres with no studs on the rear proved costly on SS12 as Solberg lost 1m46s to the stage’s fastest pace-setter. To make matters worse a puncture to the front left Michelin on his Ford Fiesta RS WRC saw the gap lengthen to second placed Sordo.

Meanwhile Citroen’s Mikko Hirvonen seems to have found his grove with his new team picking up the fastest times on the remaining two stages of the day before heading to Monaco for overnight service. Hirvonen now sits just 23.9s behind Solberg in the race for the final podium spot.

“It’s good to confirm my progress with the team with a fastest time,” said Hirvonen.

“I felt good in the car with the four studded tyres fitted. The handling was consistent and I was able to push the way I wanted. We have closed the gap to Petter [Solberg] and now its game on.”

Young Russian speedster Evgeny Novikov continues to impress as he remains a comfortable fifth ahead of 49-year-old Francois Delecour whose first WRC; event, DNF, point, stage win, time rally led and podium all came on this most famous of all rallies, Monte-Carlo. His last WRC victory back in 1994 also came on the event.

MINI driver Pierre Campana is seventh and on course for his second top-10 finish in the WRC with Ott Tanak in his Fiesta RS in eighth. Swede PG Andersson is ninth and first in the Super 2000 WRC category with Portugal’s Armindo Araujo completing the top-10 in his MINI.

Tonight the program for Day 4 features visits to two of Rallye Monte-Carlo’s trademark stages, namely Moulinet/La Bollène Vésubie and Lantosque/Luceram, with one pass in the afternoon and another in the evening under darkness.