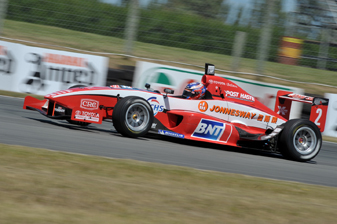 Nick Cassidy has fought through opening-lap chaos to win the first race of the Toyota Racing Series at Timaru.

Cassidy fought through and overtook pole-man Hannes van Asseldonk on the opening lap, all while fending off the attentions of Southland driver Damon Leitch.

The win has given him an equal lead in the championship and he described the win as relieving.

“It’s lifted the monkey off my back, for sure,” he said.

“It’s always good to get the first win under your belt.”

The start of the race was chaotic. Bruno Bonifacio stalled on the front row of the grid as the lights turned green.

Cassidy, Leitch and Felix Serralles swarmed van Asseldonk, who was forced to give up his lead as the field headed onto the back straight.

As the Safety Car came out onto the circuit Leitch, Cassidy and Serralles had all got in front of van Asseldonk, who was fighting off Josh Hill. Moments later as the circuit went ‘green’ and racing resumed, the fight for the lead was between Cassidy and Leitch, resolved in Cassidy’s favour.

Leitch spent several laps clawing his way back onto the rear of Cassidy’s car but couldn’t get close enough to overtake.

Serralles found himself under pressure from a charging Josh Hill, who had also overtaken van Asseldonk. Hill overtook Serralles and closed on the leading two. Leitch was pre-occupied with trying to get a clear run at Cassidy and the pair were visibly slowing. Hill got closer to the two, and made one bold move on Leitch move down the back straight, then opted to consolidate his placing.

Serralles held on for a strong fourth overall, 2.39 seconds behind Cassidy but a half second clear of van Asseldonk.

The feature race of the second round is the Timaru Herald Trophy, raced over 20 laps on Sunday.