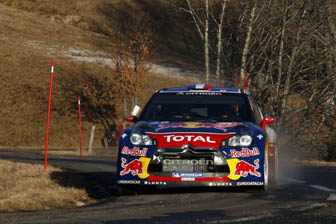 Citroen ace Sébastien Loeb continues to hold the reins on the opening round of the FIA World Rally Championship after setting five fastest times over the six stages which made up Day 2 of Rallye Monte-Carlo.

“The day was fairly easy to manage, but I still had to keep the car on the road,” commented Loeb after arriving back to the Service Park.

“We managed to increase our lead considerably and that means we’ll be a bit more relaxed when we start tomorrow’s stages. It seems there’s a chance of snow!”

In his number 37 MINI, the same number carried by the Rallye Monte-Carlo winning Mini Cooper ‘S’ in 1964, Sordo started the day in second. On the first stage of the morning (SS5), he dropped to third behind Solberg, then on SS6 moved back in front of the Norwegian, only to lose the position again on the final stage of the morning. The Ford of Petter Solberg is running third

In the afternoon, the battle continued and on SS8 Sordo set the fastest overall time, his first stage win of the 2012 Championship. However, it was not until the final stage of the day that he reclaimed second spot and moved ahead of Solberg by 3.7secs.

“It is good fighting with Petter as on one stage he is faster than me and then on another I am faster,” commented Sordo.

“In the last stage we took a little bit of time off him and got back to second, so we shall try to continue that way tomorrow!”

In his first outing with with the Citroen factory squad, Mikko Hirvonen finds himself fourth as he begins to come to grips with the DS3 WRC after six years competing under the blue oval banner.

Rounding out the top five after another measured performance in the Ardèche region is 21-year-old prospect Evgeny Novikov who lies just six seconds behind Hirvonen.

Commencing Day 2’s final stage an impressive sixth overall in his Super 2000-specification Skoda Fabia, Volkswagen Motorsport’s Sebastien Ogier suffered a high-speed crash approximately five kilometres from the finish, thankfully without injury to neither he nor co-driver Julien Ingrassia but a sour end to what was an impressive start for the Frenchman.

Day 3 comprises of two stages in the Vercors Mountains followed by a third test to the south before the monstrous 400km road section that will take crews to Monaco. The first car is due to arrive in the Principality at 19.59.