Johnson and Richards to team up in 12 Hour

Johnson and Richards to team up in 12 Hour 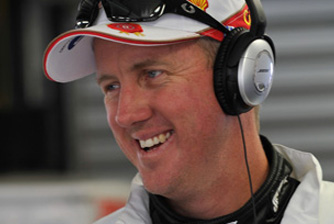 Nathan Tinkler is taking one of the strongest driving line-ups to Mount Panorama for next month’s Armor All Bathurst 12 Hour.

It will be the third year in a row that Johnson and Tinkler have teamed up for the 12 Hour, having raced in production-spec FPV GTs in the past.

The race will Richards’s 12 Hour debut.

Johnson and Tinkler are at Phillip Island today, turning laps in both their 12 Hour car, plus Tinkler’s regular 2011-spec Carrera Cup machine.

The Johnson/Richards/Tinkler Porsche entry will compete in Class B at Bathurst, but according to Johnson, they could spring a surprise if the Class A GT3 cars strike trouble.

“I’ve never raced a Porsche before, so this will be a whole new experience,” Johnson told Speedcafe.com.

“The last couple of years have been great fun, low key and relaxed in the production car, but this year in the Cup Car will be great.

“And with Richo, he has a fair bit of experience in Porsches too, so that will be quite good for us.

“We’re not in the main class, but I see no reason why we won’t be a competitive.”

Besides experiencing racing a Porsche for the first time, the Jim Beam Racing V8 Supercars driver says that the 12 Hour will provide him the perfect warm-up for the start of the V8 Championship a week later at the Clipsal 500 in Adelaide.

“For me, the best thing will be to get some seat time before Clipsal,” he said.

“I’ll be in a good, fast car, not much slower than a V8 around Bathurst. To do a whole weekend there, a week before Clipsal is perfect for my preparation.”