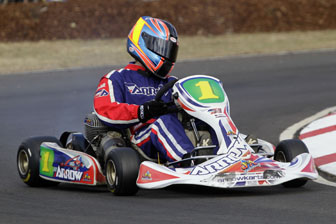 Drivers competing in Drew Price Engineering-built Arrow racing karts in Australia will be in the running for major cash prizes in 2012.

After running the Arrow Rewards program for the past six years, the champion Australian manufacturer has changed its scheme this year, boosting its cash prizes.

Winners of any Australian National Championships, CIK Stars of Karting and Rotax Pro Tour championship can expect a sizeable payday, and if any one driver wins in all three, Arrow is offering a ‘Triple Crown’ bonus incentive of $15,000.

There is also a $65,000 prize pool for the State Championships and selected state-based series including dirt racing.

Arrow’s sales and marketing manager Steve Johnson explains that the idea behind offering more cash prizes was brought on by competitor demand.

“After researching a wide variety of Arrow and non Arrow drivers, it was clearly identified that significant prize money was a big motivator in karting related decisions,” Johnson said.

“With the ongoing success of the CIK & Pro Tour series, we saw this as a great opportunity to further reward  Arrow drivers and attract non Arrow drivers.”

Arrow technical support crew will be on hand to assist drivers and crews at all CIK Stars of Karting rounds, the Rotax Pro Tour, AKA Nationals, AKA State Open Championships and selected state-based rounds

The changes to the the rewards program means that the Arrow factory race team will not be competing in 2012 season.

To be eligible for the Arrow Rewards, drivers must be in a current-spec Arrow and complete a form and send to DPE within three months of the event to be eligible.