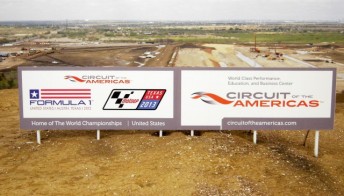 The Circuit of Americas will be complete by August

Construction on Austin’s Formula One circuit is full steam ahead and is on course to be completed in the middle of August.

After some uncertainty surrounding the Circuit of the Americas venue due to a contract dispute, a major push by officials has ensured it remained on the final 2012 calendar issued by the FIA’s World Motor Sport Council in early December.

Key circuit delegates are in London this week to update F1 supremo Bernie Eccelstone on the construction’s progress.

Confirmation of the track’s ongoing build is good news for V8 Supercars, who last year secured a deal to take the category to the new venue in 2013.

Circuit of the America’s sales officer Geoff Moore confirmed that workers are flat out on the build of the track.

“Construction is happening six days a week. The paddock buildings are being topped off, work on the main grandstand has started and we are looking at mid-August for completion.”

The Austin, Texas F1 Grand Prix is scheduled for November 16-18 this year – the penultimate round of the season.