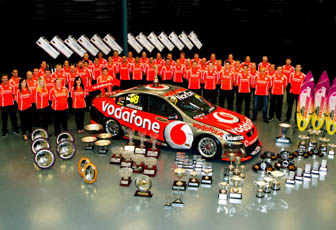 The entire TeamVodafone squad with its impressive collection of 2011 hardware

Now in its sixth season with Vodafone sponsorship, the Commodores of Jamie Whincup and Craig Lowndes have traditionally run prominently fluorescent red and silver schemes.

Last year, the team toyed with an idea of a black carbon look, but decided to retain its successful red/silver combination.

While team owner Dane would not give away too much detail, he did promise that the TeamVodafone Commodores will have a fresh feel for the 2012 season.

“You’ll have to wait and see. It is different. I won’t say in what ways, but it is different,” Dane told Speedcafe.com.

“Hopefully for all of our fans, it will be positive.”

Dane explained that there is an art to creating the right look for Vodafone and his team’s subsidiary sponsors.

“The main thing about the cars is about getting the imagery right, whether it’s for print or television, there can be no doubt which cars are ours,” he said.

“There can be no confusion. That’s always been the most important thing and we’ve managed to do that consistently. It has always been clear which ones are the Triple Eight or TeamVodafone cars.

“In the thick of the action, it can be hard to spot some of the cars and tell them apart and we never want to be in that position.”

TeamVodafone enters 2012 on the back of an all-conquering season, which included Whincup’s championship win, one-two in the championship, the Team’s Championship and the Fujitsu V8 Supercars Series (with Andrew Thompson).

The only major race the team did not win was the Supercheap Auto Bathurst 1000.

Whincup’s title was also his third in four years, ranking him as one of the sport’s great achievers.

Dane says that the team’s enviable success over the past five years, plus the striking look of its cars, will hopefully burn a lasting impression on Australian and international racing followers.

“I hope these cars will be remembered as ‘the’ cars of the current era,” he said.

“The Marlboro cars will be forever remembered as the cars of the 80s, and in my mind, the Benson and Hedges Sierras and BMWs were pretty prominent in their era.

“After that, there was a while when the Pirtek car of Ambrose was the car that stood out in people’s minds. Mind you, it helps when the car is at the front of the field …

“Hopefully, the Vodafone cars will stick around in people’s minds for a long time to come.”

The launch of the team’s new look – plus its endurance driver line-up – will take place at Vodafone’s Sydney headquarters at the company’s annual sales staff forum on February 7.

The new-look car will hit the track for the first time on February 11 at Sandown for V8’s official test day.