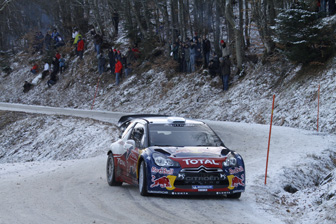 Citreon leads after Day 1 of the World Rally Championship

Sebastien Loeb leads the way after Day 1 of Rallye Monte-Carlo which stayed true to form as one of the most testing and surprise-filled events on the FIA World Rally Championship calendar.

Citroën’s Loeb led the way after SS1 until the flying Finn Jari-Matti Latvala took an incredible 50 seconds out of the Frenchman on SS2 thanks to his gamble on an extra-soft-compound set of Michelins.

With Day 1 hosting just four special stages, teams headed to service after SS2 to apply the extra-soft tyre option, giving Loeb a chance to fight back and by the end of SS3 had reduced the deficit to 30s over Latvala.

Looking to finish Day 1 with the rally lead in hand, Latvala pushed hard but rolled his Ford 10km into the final stage of the day, handing the lead back to Loeb and ending his rally with new rules for the event preventing any SupeRally option (restarting the following day).

“I really wanted to fight for victory but I was pushing too hard. There are 12 rallies still to go. We will fight back in Sweden.” Latvala said.

A consistent drive from tarmac expert Dani Sordo saw the MINI factory driver finish the opening day second, albeit some 1m04s behind the Citroën ace. Castrol-backed Ford World Rally Team driver Petter Solberg too enjoyed an error free run to be sitting third and just one second behind Sordo in his first outing with the blue oval since 2000.

“I’m so happy about the Fiesta RS WRC, but feel really sorry for Jari-Matti right now. It’s too bad he went off,” Solberg said.

“I will continue to push hard for the next three days and hopefully make the correct tyre choices!”

The biggest surprise package has come in the form of former Citroën star, now Volkswagen Motorsport convert Sebastien Ogier who stunned many in the sport to finish fourth overall in a far lesser powered Skoda Fabia S2000.

The second, 30.48km Burzet-St Martial stage saw Ogier finish with shade of brilliance and class when he took an astounding 21 seconds out of his former team-mate Loeb on the test.

See below for the leader board after Day 1