Youngsters throw down gauntlet in shakedown

Youngsters throw down gauntlet in shakedown 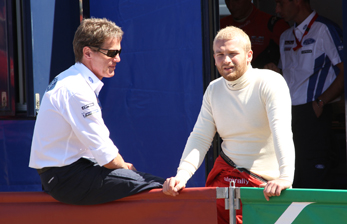 In less than 24 hours, the flag will drop on Rallye Monte-Carlo, the opening round of the FIA World Rally Championship and last night’s shakedown results indicate young talent is preparing to dominate the world stage in 2012.

Russian driver Evgeny Novikov, 21, posted the quickest time during shakedown behind the wheel of his Ford Fiesta RS with a time of 2min13.0s to edge out MINI driver Armindo Araujo, with defending champion Sebastien Loeb was third fastest through the 3.58km test.

Rounding out the top 10 was former Citroën WRC driver, now Volkswagen Motorsports number one Sebastien Ogier who, behind the wheel of a Škoda Fabia S2000, set an amazing time on the stage, outclassing many of his rivals in higher-powered machinery.

In 2012, Volkswagen is contesting the entire WRC in the smaller SWRC class with two Fabia S2000 cars of the group’s Škoda brand. The runs serve as preparation for the 2013 season in which Volkswagen will compete in the WRC’s premier class with the Polo R WRC.

The opening three days of Rallye Monte-Carlo are based around the city of Valance, 390 kilometres north west of the event’s base in Monaco. The first two legs on Wednesday and Thursday include more than 130km of competition each in the Ardèche region.

Friday’s third leg covers stages east of Valence in the Vercors mountains and Haute Loire region, before the long journey south to Monaco.  A Saturday afternoon restart precedes two loops of two tests in the Alpes Maritimes, including a double pass over the legendary Col de Turini.

The opening stage of Rally Monte-Carlo – Le Moulinon – Antraigues – kicks off at 19.04 AEST. Stay tuned to speedcafe.com for daily reports from the opening round of the 2012 World Rally Championship.

See below for the top 10 fastest from the Shakedown stage