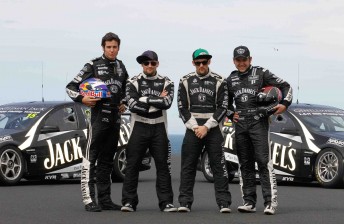 American rock héros Good Charlotte have been confirmed as the lead music act at this year’s Clipsal 500.

The act will perform on Sunday evening (March 4) after the final race of the opening event of the V8 Supercars Championship.

Good Charlotte has a close connection with V8 Supercars. Joel and Benji Madden, the brothers who formed the band, went for a passenger ride with Jack Daniel’s Racing at Phillip Island in 2010. The bad also played at New Zealand’s street race at Hamilton last year.

Joel Madden says he is looking forward to getting back to a V8 Supercars race.

“The band is pumped to be invited to perform exclusively at the Clipsal 500 Sunday concert,” Madden said in a statement.

“We love the V8 Supercars and can’t wait to be trackside. Good Charlotte is going to put on one hell of a show so see you there.”

Good Charlotte was formed in 1996 in Waldorf Maryland USA, and since 1998 the band’s constant members have been lead vocalist Joel Madden, lead guitarist and back-up vocalist and twin brother Benji Madden, bass guitarist Paul Thomas and rhythm guitarist and keyboardist Billy Martin. The latest drummer and percussionist is Dean Butterworth who has been a member of the band since 2005.

Attendance at the concert is free to all valid Clipsal 500 Adelaide ticket holders for the day.