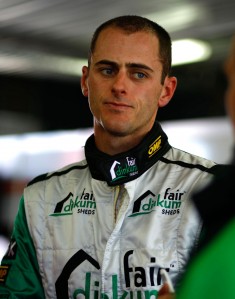 After competing with Tony D’Alberto Racing in the Development Series last year, Wall steps up to the Main Series as a rookie.

Speedcafe.com’s Grant Rowley spoke to Wall about his upcoming debut and his expectations for the 2012 V8 season.

DAVID WALL: Yeah. I have to prove myself yet, but this is a massive thing for me. It’s something I’ve been working towards for a long time. I’ve always had the goal of trying to get there.

Not only do I get to make my debut in the Main Series at Clipsal as the main driver, I get to do it with a very good team and very good equipment.

SPEEDCAFE: You’re no stranger to the category, having done three V8 endurance seasons, plus the Development Series last year, so you realise how big a task this will be …

WALL: Obviously, it’s a massive step, but it’s one I’m looking forward to.

I’m putting myself up against the elite drivers in the country, and that’s what you need to do if you want to be a professional driver – you need to prove yourself against those guys.

Apart from the enduros, this year will be the first time that I’ve been in equipment to be able to do the job. My race pace has always been good enough, but my qualifying speed hasn’t, so that will be the areas I’m looking to improve.

WALL: It’s a very tough industry. It’s very hard to be winning races one weekend and backing it up. Brighty had two wins last year, and you’re talking about running up against the best cars, the best equipment and the best drivers in the country.

SPEEDCAFE: I’m sure you’ll agree that, as a rookie, coming in as a team-mate to Bright and Fabian Coulthard is a great pair to learn from …

WALL: You can never stop learning from anyone, and you couldn’t ask for better team-mates. They’ve both been in the industry for a long time and it’s a great thing for me to have on my side. They are good guys and I’ll be learning as much as I can from them.

SPEEDCAFE: You’re on a one year drive deal. I guess that makes it vital to do a good job this year to ensure you get a second season – that’s where you’ll see the big gains.

WALL: Exactly. This year is going to be a learning year. I need to work on the qualifying side of things, and if I can do that, I can start pushing for better results. Every race will be a learning curve for me.

SPEEDCAFE: Do you have any expectations or goals?

WALL: We have our own expectations that we’ll keep to ourselves at this stage. We want to build as the year goes, finish every race and finish where we’re all happy with.