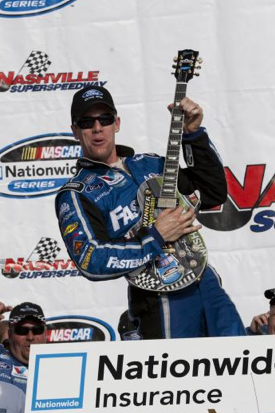 Carl Edwards will concentrate his efforts on the 2012 NASCAR Sprint Cup Series, stating that he will not compete in the NASCAR Nationwide Series.

Edwards, a former Nationwide Series winner, has indicated that he will not start the season in the second-tier NASCAR series, but has left the door slightly open for a return – just in case he feels the urge.

“The way we’re approaching this season is, I’m not committing to any races right now,” Edwards told NASCAR.com.

“I’m hoping this lets me focus more on the Cup car, lets me be a better Cup racer by maybe having more time during the race weekend to maybe hone the setups in.

“And, as the season goes, if I decide I’m just a nervous ball of energy on Saturdays and I can’t function without going racing – because that might be the case – then we’ll work to try to go [Nationwide] racing.

Edwards says that when NASCAR issued a rule last year that limited drivers to racing for only one national series in any season, he was already considering pulling out of Nationwide.

“So we stuck with it and we did it. But to me, that was really, in my mind, my last real go at it for the whole season.”