Wild weather cause chaos at Teretonga

Wild weather cause chaos at Teretonga The TRS field in a rare dry spell on Sunday

Damon Leitch has taken a slender lead in the 2012 Toyota Racing Series after a wild first round at Teretonga.

The Victory Motor Racing driver finished second (Race 1 Saturday) and fourth (Race 2 today) before the final race of the event was declared after five laps due to a torrential downpour midway through the race.

CLICK HERE for Speedcafe.com’s report from Race 1 on Saturday.

Race 2 started in dry conditions but was flagged a lap early when a freak rain and hail storm hit the 2.62km track. 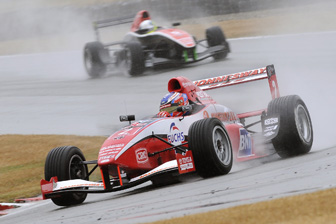 The weather conditions only worsened for the 12-lap final race, with victims claimed in all directions and the majority of the early laps spent under Safety Car.

The race was declared with with zero visibility and rivers forming across certain parts of the race circuit.

Race 1 winner Josh Hill slipped down the order in Race 2 when he elected to pit under Safety Car conditions to change to wet tyres. He finished that race in 13th place.

The championship points sees Leitch with a small points lead over Cassidy, who sits ahead of Giles Motorsport’s double race winner van Asseldonk.

The TRS show now travels to Levels Raceway in Timaru. Testing commences on Thursday with three 30-minute sessions, before official practice on Friday and a qualifying session and three races over the weekend.