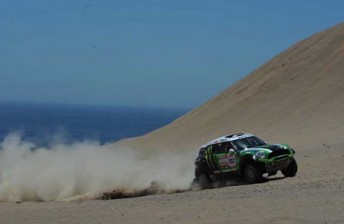 Stephane Peterhansel is closing in on the overall victory

X-Raid Mini driver Stephane Peterhansel has edged closer to a 10th Dakar Rally crown following the 12th stage of the 2012 edition between Arequipa and Nasca.

The Frenchman finished just seventh on the 245km stage, having lost approximately 20 minutes extracting his Mini from a sink hole.

Team-mate Nani Roma was only able to claw back three minutes however after encountering similar problems, leaving Peterhansel with a comfortable  20 minute lead heading into the final two days of the rally.

“As soon as we crossed the first dunes, we went over a crest and behind it was a sink hole,” explained Peterhansel. “We cleared some sand and moved the car forward centimetre by centimetre to get out of there. We lost at least 20 minutes.

“Afterwards, I have to admit I took risks to claw the time back. That was the 50 km where I’ve attacked the most during the whole rally. I’ve been saying for a while that by getting stuck in the dunes it’s possible to lose half an hour. Today we came close to a real setback.”

Gordon is fourth overall behind Peterhansel, Roma and Giniel de Villiers, but is competing under protest having been thrown out of the rally for engine irregularities discovered on Wednesday.

“I just proved that Minis are for girls, because we beat them by twenty minutes,” boasted the American after Stage 12.

” We schooled these boys. I’m pissed. I’m pissed at Stephane and I’m pissed at Nani for challenging my character about being a cheater and today I kicked their asses. I’m going to prove something every day for the rest of the rally. We’re going to win every special from here home.”

Coma’s efforts were assisted by tactics yesterday which saw him start third on the road for Stage 12.

Coma’s lead over Despres stands at just 1:35s , with Helder Rodrigues continuing to hold down third – a further 1h12:14s adrift.

“It’s no way near over, because there’s another big stage tomorrow,” said Coma after the stage.

See below for the official Stage 12 video summary