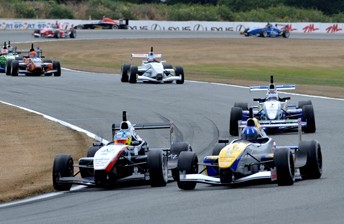 British racer Josh Hill has opened his 2012 Toyota Racing Series championship with a win in the first race at Teretonga.

After qualifying fourth, Hill, the son of 1996 Formula One World Champion Damon Hill and grandson of World Champion Graham Hill, put in a well judged drive and kept his head in chaotic conditions in the opening laps, scoring a valuable first win.

While Hill was the victor, young Austrian Lucas Auer will rue what could have been. Auer, the nephew of former McLaren, Ferrari and Benetton Formula One driver Gerhard Berger, sped to the front of the timesheets in a wet qualifying session

Speedcafe.com-supported Hill led at the re-start from fellow BRDC Rising Star driver Jordan King. Hill survived a three-car tussle for turn one and went on to win the race ahead of Southland racer Damon Leitch and Auckland’s Jono Lester.

The two other cars involved in the squeeze going down the front straight and into the first turn were Hannes van Asseldonk and Jordan King.  Both went off the track and were unable to rejoin.

Leitch had made the most of the confusion after the original start and carved cleanly through to be fifth at the re-start, then worked his way up to Hill as the first lap continued.  Likewise Lester had re-started third and hung onto Hill through that first lap.  When van Asseldonk and King went off he found himself in a battle for second place, an all-Kiwi tussle with Leitch.

The race was placed under the control of the Safety Car and then finished early when the cars of van Asseldonk and King could not be recovered before the scheduled end of the race.

The Toyota Racing Series is back on track at 11.44 am tomorrow for the weekend’s feature race, the 20 lap Spirit of a Nation.

The first round of the series concludes with a further race over 16 laps on Sunday afternoon.