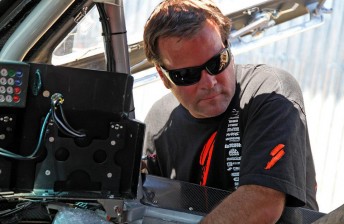 Robby Gordon racing in the Dakar 'under appeal'

US driver Robby Gordon remains in the Dakar, only under appeal, after his Hummer was ruled illegal after the ninth stage in Chile.

Gordon has been on the march since the rest day on Sunday and was closing-in on the lead of the Mini of Stephane Peterhansel. Race officials claim that Gordon’s engine has received extra power from modifying the tyre-reinflation system to provide additional air-induction. The American has stated the Hummer is not running such a system and that the layout has not been altered since the detailed pre-race scrutineering process.

Dakar organisers released the following statement. ‘On completion of the 9th stage (Antofagasta-Iquique), following observation of technical non-compliance on vehicle No. 303 (Robby Gordon) (article 1P and 3P of the technical rules), the Car Race Officials’ Committee has decided to disqualify No. 303 from the race. The driver has appealed against this decision. During appeals, decisions are placed on hold. As a result, vehicle No. 303 will continue the rally until the outcome of the appeal’.

That appeal will be in early February in Paris.

On today’s 377km 10th stage from Iquique to Arica in Chile, Gordon struggled after he damaged the front left wing of his car, leaving the road open for Peterhansel to benefit. However, it was another Mini that won the stage with Juan ‘Nani’ also moving into second place in the overall standings overhauling Gordon and fellow Mini driver Krzysztof Holowczyc, who broke his power-steering and is out of the event.

“I’m looking at the bigger picture and I want to finish in Lima in the best position possible.

“For the moment, there are no instructions. It’s important to do things correctly like we have done up to today. Stephane (Peterhansel) is 18 minutes ahead of me, which is a bit far, but you have to believe and drive like we have been doing since the start.”

A good run for Australia’s Geoff Olholm who was 24th on the stage to be placed 53rd overall.

On two-wheels, Joan Barreda took the stage win 92 seconds ahead of Marc Coma with Cyril Despres a further 127 seconds behind.

“On today’s stage, I had a problem with my foot,” said Barreda.

“On a very quick bend, where I was at 120 km/h, I hit a stone with my foot and I thought that the impact had torn my leg off.

“When I arrived at the refuelling zone, I took some painkillers and it was ok until the end of the stage. I even sped up.

“I don’t know how serious the injury is, but I think I should be ok and be able to finish in Lima.”

The battle for the overall lead between the KTM duo of Despres and Coma is now just 21 seconds in the favour of the Frenchman.

For the three remaining Aussies Dean Nuttel jumped back up from 40th to 37th overall, David Schwarz improved three places to be 44th and Jamie Chittick finished five sports up in 61st.

In the quads Tomas Maffei won the stage, but Patronelli brothers still lead the way. Alejandro is just under 80 minutes in front of Marcos, with Maffei 17 minutes further back.

In the trucks Kazakh driver Artur Ardavichus won the stage in his Kamaz ahead of his Russian team-mate Andrey Karginov. Gerard de Rooy in an Iveco leads team-mate Hans Stacey overall with Ardavichus under five minutes behind.