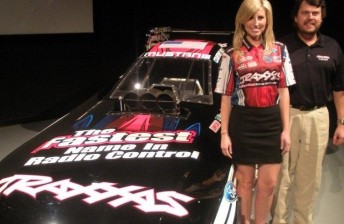 23-year-old Force is a national event winner in the Top Alcohol Dragster division and will take the next step forward into one of the Castrol GTX-backed 8,000 Horsepower Funny Cars. Nevertheless, stepping behind the wheel of the Funny Car is not a daunting task for the stunning blonde, having tested post-events throughout 2011.

She will join her father – a 15-time NHRA Series Champion – Robert Hight and Mike Neff in the team and picks up where her elder sister, Ashley Force-Hood left off. She is being backed by TRAXXAS – a manufacturer of drive-ready radio-controlled cars.

“This is what I’ve always wanted to do and to have had my sister Ashley, my dad, brother-in-law Robert Hight and Mike Neff teach me makes it that much better. I have had the best teachers. I’m just going to learn all I can and see where it takes me.”

As for the differences between the Top Alcohol dragster and the Funny Car:

“Steering the car was one of the biggest changes for me,” she explained.  “You don’t want to over-steer in a dragster (but) then you get in a Funny Car and you almost have to over-steer to keep the car going straight.  There’s just a lot more manhandling of the Funny Car than there used to be in the dragster, but it’s definitely been fun.”