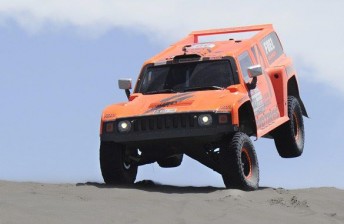 Robby Gordon on a charge at the Dakar

Mixed emotions for the Hummer team at the Dakar with Robby Gordon winning the 606km Antofagasta-Iquique stage in Chile, while team-mate and defending champion Nasser Al-Attiyah retired from the event with mechanical issues.

Gordon (USA) won his first stage of this year’s event by 98 seconds from the Mini X-Raid of Stephane Peterhansel and closed to within six minutes of the Frenchman’s lead.

The stage was highlighted by the 32%-gradient descent over the dunes into Iquique.

“It was a very good special for us again,” said Gordon.

“I pushed very hard on the last section, as hard as I could go the whole time, like qualifying hard, not really knowing where you’re going.

After winning the stage yesterday, Juan ‘Nani’ Roma (Mini) was more than eight minutes behind.

For title holder Al-Attiyah his up and down event finally ended with engine and alternator drive belts failure at 200 km leaving Gordon as the only one to fight the armada of Minis.

On two wheels Cyril Despres hit back after his mud bath yesterday to regain the lead from KTM rival Marc Coma.

“After a difficult day yesterday when you start to doubt, I had to get back to winning ways,” said Despres.

“It wasn’t easy to psyche myself up for it, but I’m very happy with my day’s work.

“We came into this looking at a battle for seconds or minutes. It’s very competitive. Like any top level sportsman, if you don’t like confrontation or squeezing the last ounces of strength out of yourself, then you’re not ready for a fight. But, as for me, I’m up for it.”

In just his second Dakar, Spaniard Juan Barreda Bort set the third best time. It might have been 8:28 behind Despres, but more than three minutes ahead of regulars Helder Rodrigues and Paulo Goncalves.

In the quad race the Patronelli brothers of Argentina continue to dominate. Finishing 44 minutes after the siblings, who rode together throughout the day, Tomas Maffei (Argentina) lost his second place in the general standings, where the gaps have started to grow! As a result, Alejandro leads Marcos by 80 minutes.

In the truck race, the bad news came from the camp of Alès Loprais. Coming into the stage in second place the Czech driver was forced to drop out of the race after an accident on the neutralised section of the route. Deprived of his most serious rival, Iveco drivers Gerard De Rooy (Netherlands) eased off during the second timed section to cross the finishing line in third place on the day, behind Hans Stacey and Miki Biasion.