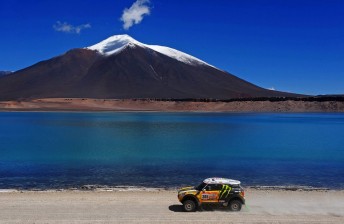 Juan 'Nani' Roma had little time to take in the scenery

Mini’s Juan ‘Nani’ Roma has won the 477-kilometre stage 8 of the Dakar between Copiapó and Antofagasta in Chile by just five seconds from the Hummer of Robby Gordon.

The US driver gave it his all in an attempt to get his first stage win in the 2012 event, but the best news for him came in the overall standings where he is now only just over seven and half minutes behind leader Stéphane Peterhansel.

“Nani may have beaten me, but it must have been close,” said Gordon.

“Beating Peterhansel by seven minutes makes this a great day. In all honesty, I did not attack too much, except towards the end of the stage.

“At any rate, I was not at my best in the first 300 kilometres, only in the last 150. I felt the others breathing down my neck, so I accelerated.”

As good as it was for Gordon; today’s stage was once more marked by the bad luck for team-mate Nasser Al-Attiyah. The Qatari, who was the first driver on the course, was forced to stop several times during the special due to reasons including wobbly spare tyres and alternator problems. Despite finishing the stage at full speed, the defending champion lost another over eight minutes and is over 45 minutes from the lead.

Australia’s Geoff Olholm was 33rd on the stage and is 76th overall; although this could change once further cars finish the stage. This comes after a tough few days which included a full night stuck in the desert. On today’s stage he had no major issues and passed 40 cars after starting off the back.

In the bikes Marc Coma jumped fellow KTM rider Cyril Despres who literally got stuck in the mud. As a result, the Spanish star took his 20th stage win of the Dakar and seized the overall lead; the margin is 86 seconds.

Despres (France) and Paulo Gonçalves both spent almost ten minutes and massive amounts of energy to get out of mud bog. Aware of his rival’s mishaps, Coma put the hammer down until the risk of damage to his own motorcycle made him lower his pace near the finish.

With the mud being a massive issue, the organisers re-routed the field after the seventh bike and adjusted the times for those riders, but Coma had already made his move.

“I was lucky not to lose too much time in the mud and then I saw I could open a gap, so I attacked really hard,” said Coma.

“But towards the end I noticed I had engine problems, so I slowed down a bit to ensure I would make it to the finish.

“This is my 20th special victory: a nice figure. Yet it is not winning specials that counts, but winning the race. And I know there is still a long week of racing ahead.”

For the three remaining Aussie Dean Nuttel improved two places to be 38th overall, David Schwarz up three posts to 52nd and Jamie Chittick jumped six riders to be 70th.

In the quads the Alejandro Patronelli led for most of the stage before his brother Marcos surged ahead to win by 38 seconds. This stellar performance by the two Argentineans was only threatened from afar by Tomás Maffei, who lost just under 10 minutes, but remains second overall to Alejandro with Marcos nearly 13 minutes back.

In the trucks the Czech Republic’s Ales Loprais has taken his first stage win of the 2012 event 91 seconds ahead of the Netherlands’ Gerard de Rooy, who kept a comfortable margin of 15:39 over Loprais and 48:06 over his Dutch teammate Hans Stacey.