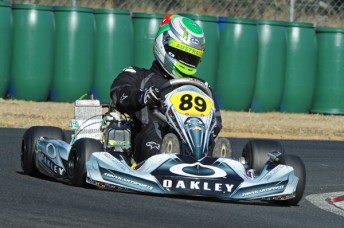 Australian kart racer James Macken has jetted out to America today to compete in the Senior Max category in the opening event of the Florida Winter Tour at the Palm Beach International Raceway this weekend.

The Oakley-backed driver will be the only Australian competing at the event that will see many of the world’s top kart racers in action – including Canadian Pier-Luc Oullette and Englishman Ben Cooper, who have both won the Rotax Max Challenge Grand Finals on two occasions.

Australian Dave Sera was victorious in last year’s Florida Winter Tour to kickstart a fantastic year for him and Macken is hoping a strong showing this weekend will do the same for his year ahead.

“My 2011 season didn’t really finish the way I would have liked (Macken crashed out of the Rotax Max Challenge Grand Finals in November), so I’m very keen to start 2012 on a high,” said Macken.

“The Florida Winter Tour has attracted some of the biggest karting names, it will be great to take on some of the world’s top drivers again.”

Along with Macken, there will also be some famous motorsport identities in action in this weekend’s Tour opener.

After dominating the DD2 Master’s class last year until missing the last weekend to attend to his IndyCar racing duties, Alex Tagliani will be back in a kart this weekend. This year he’ll run the full schedule of the Keane Racing sponsored DD2 Masters events, with an eye on earning his way to the Rotax Grand Finals.

In 2011, Brazilian Formula One ace Rubens Barrichello raced in the Formula Open Shifter class. This year another fast Brazilian F1 driver will race in the Tour with Nelson Piquet jr. lining up in the DD2 field.