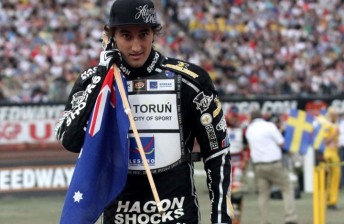 Chris Holder won the opening round of the Australian Speedway Championship

Hosting an Australian Championship round for the first time, the North Brisbane track delivered it’s fair share of drama.

Holder was beaten only once on the night – by Queenslander and his former Poole Pirates team-mate, Davey Watt. Watt qualified for the A-Final one point behind Holder on 13.

Joining them in the four lap finale were New South Wales firebrands, Sam Masters and Rohan Tungate – who qualified through the Friday night qualifying meeting and ended his five heats with a stunning 13 points.

Holder got the best of the start and Watt put in a furious performance to try and run down the 24-year-old, but it wasn’t to be, Holder walking away with another round win in an Australian Championship.

Tungate was the big talking point though. About to embark on his first British campaign, the former road racer rounded up Sam Masters to take an outstanding third placing in the Final.

There was a serious incident during the course of the meeting with Hunter Valley charger, Kozza Smith coming to grief after a collision with Brisbanite, Troy Batchelor. Smith hit the fence incredibly hard and was carted from the venue with a suspected broken femur. His bike was rendered useless in the accident.

Batchelor – Holder’s arch rival on home turf – didn’t have the start he was looking for, eventually pulling out of the meeting with bike issues – his Australian Championship dream all but gone.

The troupe now heads to Kurri Kurri in the Hunter Valley for round two of the Championship next Saturday night.

AUSTRALIAN CHAMPIONSHIP STANDINGS (AFTER ONE ROUND OF THREE):