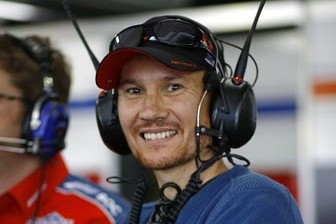 A star-studded guest list will come together at Sandown Raceway to celebrate the life of Jason Richards.

Richards, who passed away last month after a short battle with an aggressive form of cancer, will be honoured this Monday (January 9) with a public memorial service. Jason Richards with his wife Charlotte

Special Jason Richards merchandise will be available on the day, plus a gold coin donation, with proceeds going to the Richards family.

It will be the second memorial service that Sandown has hosted for a fallen motor racing hero. In September 2006, Sandown was the venue for a public memorial for the late Peter Brock.

Sandown Raceway manager Wade Calderwood says that he would like to see a similar vibe at Richards’ service.

“The theme of the day will be very similar for the Peter Brock Memorial,” Calderwood told Speedcafe.com.

“We see it as more of a celebration. We want to celebrate the way he lived his life, and this is a way for us to pay tribute to that.

“Given that there has been a lot of outpouring of emotion on various websites, I’m expecting a good crowd to commemorate with us on Monday.”

The memorial service will start at 3pm.

Important things for the public to note are:

Entry: Via the Main Gate turnstiles (Gate 2), not the motorsport end. Gold coin to be donated to the Richards’ family trust.

Memorial: Grandstand seating area in the middle of the grandstand, overlooking the Mounting Yard