Holowczyc bounces back on Stage 5

Holowczyc bounces back on Stage 5 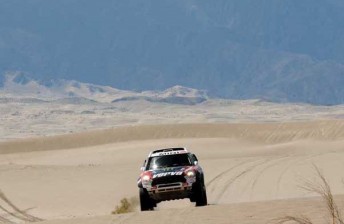 Holowczyc cuts his way through the impressive landscape

Polish driver Krzyzstof Holowczyc has reduced the deficit to rally leader and team-mate Stephane Peterhansel on the 2012 Dakar.

Having fallen from the overall lead to fourth yesterday, Holowczyc halved the gap by winning Stage 5 – a 177km test between Chilecito to Fiambala.

The result sees Holowczyc move back up to second in the overall standings, and ensures that four of the five X-Raid Minis have won stages so far.

“Yesterday, I lost a lot, I don’t know why, it was perhaps something in my mind,” said Holowcyc after Stage 5, which was shortened by almost 50km due to overnight rain.

“I had a headache in the morning and felt like a chicken inside, just driving right here, left there, like a small guy. But today we decided to attack properly, though we went off the road and couldn’t see the road at times. For sure it was a good stage and we are back in the game.”

There was drama in the stage for two of Mini’s biggest threats, with Giniel de Villiers losing 20 minutes with mechanical issues aboard his Imperial Toyota, and Nasser Al-Attiyah losing 24 minutes with overheating issues. The pair now sit fifth and eighth in the overall standings respectively.

With solid runs on the day’s stage, Nani Roma (Mini) and Robby Gordon (Hummer) both benefited from de Villiers’ dramas to sit third and fourth in the overall standings respectively.

Meanwhile in the Moto division, Cyril Despres edged arch rival and KTM team-mate and Marc Coma by 1:14s on the stage, increasing his lead in the overall standings to just under 10 minutes.

Spaniard Joan Barreda Bort and Slovakian Stefan Svitko took surprise third and fourth places respectively on the stage, while Dutchman Franz Verhoven was fast early before stopping in the stage with mechanical issues.

“After the first day, you could have said that lots of other riders were going to be involved in the fight, but in the end, there aren’t too many,” quipped Despres of the widening gaps in the standings.

There was drama on the stage for the Australian bike contingent, with Rod Faggoter retiring from the rally after the engine blew on his Husaberg. The Queensland had sat 25th overall after Stage 4.

Countryman Craig Tarlington and Mark Davidson also struck trouble, with the pair remaining in the stage as night fell. Dean Nuttal has now taken over from Faggoter as the leading Australian in 41st place.

The only Austalian in the Auto division, Geoff Olholm, is currently 74th overall after blowing two turbos yesterday.

Marcos Patronelli extended his overall lead in the Quads by taking his third consecutive stage victory, while Truck category leader Gerard De Rooy was fastest for the day in his Iveco.

UPDATE: Rally organisers have announced that Friday’s sixth stage of the 2012 Dakar – set to be run between Fiambala and Copiapo – has been cancelled due to bad weather.

“For the 7th time, the Dakar is about to cross over the Andes, and because of very unfavourable conditions, added to the fact that the course has been hit by rain and snow, in order to guarantee the security of the competitors and those following the rally, the organisers have decided to organise a convoy for all vehicles tomorrow,” read an official statement.