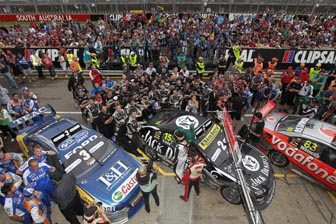 Patrons at this year’s Clipsal 500 will be able to enjoy full-strength alcoholic beverages again.

After reverting to a maximum of mid-strength alcohol last year, organisers of the classic street race will allow spectators the opportunity to purchase full-strength beer and spirits at the March 1-4 event.

The event’s media manager Mike Drewer said that patron feedback has led to the change.

“We received feedback from spectators that they would prefer to have the option of full or mid-strength beverage,” Drewer told Speedcafe.com.

“We’ve had a remarkably well-behaved crowd, and we’ve never had any major issues, but as XXXX is a mid-strength beer of V8 Supercars, we went along with that last year.

“We gave it a crack, but it wasn’t well received, so it was simple case to change back.”

While V8 Supercars is yet to announce beer rights for the 2012 Championship, new Clipsal 500 Adelaide wine provider Festival City Wines will provided a premium range of red, white and sparkling wines. V8’s bournon sponsor Jim Beam will be available from bars around the track.

The Clipsal 500 is the opening event of the 2012 V8 Supercars Championship and kicks off in 54 days at the Adelaide Parklands circuit.