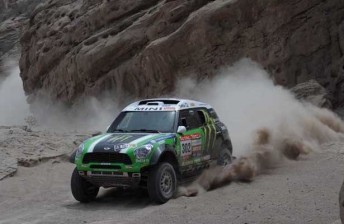 Frenchman Stephane Peterhansel has taken the lead of the Dakar Rally after winning Stage 4 between San Juan and Chilecito.

Having won the 326km test by 5:19s from Argentinean Orlando Terranova, Peterhansel has jumped from fifth to first in the standings.

Stage 3 winner Nani Roma took fourth on the day’s stage to sit third in the rally, while erstwhile leader Krzysztof Holowczyc is now fourth, some 8:10s adrift of team-mate Peterhansel.

According to Peterhansel, it is not ideal to have taken the lead ahead of tomorrow’s split stage.

“We just stayed out of trouble to avoid getting lost or having flat tyres and with a very consistent pace from the beginning to the end… which paid dividends,” said Peterhansel of Stage 4.

“But I would have preferred not to lead the field tomorrow, since there will be no motorcycle tracks. This is not what I would have liked from a tactical point of view, but I think the others made a lot of mistakes, so we will race at the front.”

The Hummers of defending winner Nasser Al Attiyah and American Robbie Gordon both struck trouble in the stage, losing 26m and 18m respectively.

While punctures slowed Gordon, Al Attiyah had found himself stuck in a muddy area of the stage. Despite falling to seventh in the overall standings, more than 30ms from the lead, the Qatari is optimistic that a fightback remains possible.

“The race is not over yet and we will try to do our best over the next ten days,” said Al Attiyah.

“I am starting to get the feel of my car. This morning we were moving at a great pace, setting the best times without pushing too hard. We actually overtook two of the Minis… So we will see what we can do.”

There was also trouble for Australian Geoff Olholm in the stage, with the Desert Warrior yet to reach the finish line as night fell following turbo issues.

In the Moto division, Spaniard Marc Coma did his best to claw back some of the time lost to arch rival Cyril Despres after his navigational error yesterday.

Despres dropped just 2:02s to Coma on Stage 4 however, with the gap between the pair at the top of the overall standings now sitting at 8:10s.

“It was a very tough special, in particular at the beginning with the fast start,” said Coma.

“Then, we had to focus on the navigation and tackle water, a lot of it, in the ríos. I tried to drive at a very high pace from the beginning, but it was difficult. I was able to overtake a few pilots and gain some time on Cyril. Fiambala and many other stages still lie ahead. That is the way things are right now. And I keep on fighting every day.”

Having struggled to ninth on the day’s stage, Chilean hero Francisco Lopez is now 29:50s adrift of Despres in the overall standings, but maintains his third position.

It was another strong day for the Australians, with all six riders making gains in the overall standings. Husaberg rider Rod Faggotter continues to lead the charge, improving one place to 25th after the day’s stage.

In the Quad category, the Argentinean contingent strengthened its grip on the 2012 rally, with Tomás Maffei taking the stage win and the lead in the general classification, where he has a gap of 2:52s over Alejandro Patronelli and 6:10s over his brother Marcos.  All other competitors lie over one hour behind the leading trio.