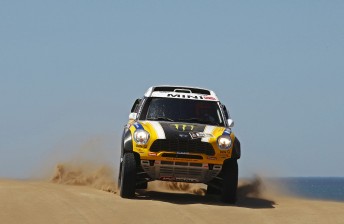 Two punctures over the final 50km of today’s third stage of the Dakar Rally has seen Stephane Peterhansel slip from a handy lead in South America.

The 291km stage from San Rafael to San Juan was won by the Frenchman’s Mini X-Raid teammate Juan ‘Nani’ Roma (Spain) with Poland’s Krzysztof Holowczyc in another Mini now heading the leaderboard after finishing second on the stage.

“It’s good and we are happy about it,” said Roma.

Australia’s Geoff Olholm improved one place to be 25th overall at end of the third stage.

On two-wheels French star Cyril Despres has shown his class by winning the stage and taking the lead overall. The KTM rider was 13th after the opening stage, but has since gone about business in his usual professional manner overhauling Spanish rival Marc Coma who made a critical error during the stage. At 164km Coma incorrectly chose the car/truck route for a section of the stage and despite realising his error, he could not bridge gap and lost 13 minutes to trail Despres by over 10 minutes.

“Well it was a quite good day, apparently,” said Despres.

“They had organised us a loop of 70 km for just the bikes which was even tougher than endurance riding because the tracks were completely invisible because of rain.

“At the river it was crazy, but I took my time and I didn’t want to push too much. On the last bit on the special stage I was thinking that I wasn’t sure if there was a bike in front of me.

“The track was not well marked, sometimes only a little bit, but apparently I’ve finished the special first, a little bit tired but with a good time.”

Frans Verhoeven picked up second place 8:37 behind Despres, with Paulo Gonçalves only two seconds further back.

Polish rider Jakub Przygonsky blew his engine, while the medical helicopter was needed for Quinn Cody (USA), who broke his collar bone following a spectacular fall.

A strong day for Australia’s Rod Faggotter (Husaberg) who set the 16th fastest time to move from 35th to 26th in the general classification. All six Aussie riders once again completed the day. Dean Nuttall (KTM) slipped from 50th to 58th, David Schwarz (Husaberg) climbed 11 places to be 62nd, Jamie Chittick (Honda) up two spots to 81st, Craig Tarlington (KTM) jumped from 147th to 134th and Mark Davidson (KTM) is up one place to 141st.

In the truck category, Team De Rooy confirmed their potential by winning a second consecutive stage. This time it was former World Rally Champion Miki Biasion (Italy) who picked up his first stage victory on the Dakar. In the general standings Kazakhstan driver Artur Ardavichius took the lead for Kamaz.