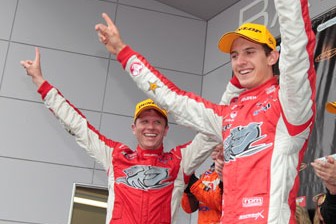 Garth Tander and Nick Percat on the Bathurst podium

The eighth episode of the Armor All Summer Grill focuses on ‘The Great Race’ – the 2011 Supercheap Auto Bathurst 1000 at Mount Panorama.

And what a race it was.

Garth Tander took his third Mountain victory, alongside rookie driver Nick Percat. The win didn’t come easy for the pair, though, having to fend off Craig Lowndes in the TeamVodafone Commodore in what was the most intense Bathurst finish on record.

See below for Episode 8 of the Armor All Summer Grill – only on Speedcafe.com.