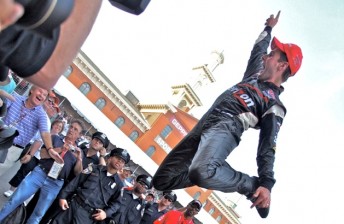 Australia’s Will Power has some extra Christmas cheer following the announcement of a 15-race confirmed IndyCar schedule for 2012.

After finishing second in 2010 and 2011 to Dario Franchitti, the Penske driver recognised as the best road/street course racer in the series, will only have to tackle four oval courses in total, one of which is Texas Motor Speedway which he took a victory at in 2011. The Toowoomba native has won at nine of the 15 tracks on the schedule, including twice at Edmonton in Canada.

The oval speedways dropped from the 2012 schedule are Las Vegas, Kentucky and New Hampshire. The only new oval track added is California Speedway at Fontana.

There will be Japan with a street race at Quindao in China the only Asian event for IndyCar in 2012. The Belle Isle circuit in Detroit returns for the first time since 2008.

IndyCar CEO Randy Bernard said that although the initial calendar drops the number of rounds from 17 in 2011 to 15 next year, there was a chance that further races will be added before the start of the 2012 season.

“With the new car and engine manufacturer competition, we believe they will be tremendous events that will help IndyCar grow.

“We are exploring adding additional events to the 2012 schedule. We’re in the process of confirming a 16th event, while also considering adding a 17th race to the calendar.”

The famed Indianapolis 500 will take place at the ‘Brickyard’ on 27 May.

* Races Will Power has won previously